On a very cold December morning, we decided to travel to the Forlì countryside (Italy), to the Sole e Terra farm, to talk to the owner Fabrizio Rabiti, a customer and friend of Martignani.

Sole e Terra is a family business started many years ago, thanks to Fabrizio's father, and started with just 3 hectares of land. Then the company expanded until it now has around 65 hectares of crops, mainly stone fruits (peaches, plums), kiwis and apples.

Fabrizio tells us how he got to know Martignani, about 15 years ago, thanks to a neighbour of his who has been using our machines for over 30 years and who also let him try them out more than once. And so it was that after trying Martignani's sprayers, a few months ago he decided to buy a 1500 litre electrostatic Turbo 2.

Six days after the treatment, fruit samples were analysed and:

- Of one of the products in the treatment, there were no traces either in the orchards treated with the electrostatic charge or in those without it.

- Of the second product, 6% more product was present in the orchards treated with electrostatic charge than in those treated without.

- Of the third product, 30% more product was present in the orchards treated with electrostatic charge than in those treated without.

With these analyses, according to Fabrizio, "it is shown that 'even though six days have passed, which is too long, as I should have had the analysis done the next day, the deposit of product, in the fruit, is much better with the electrostatic charge. And the residue is still well below the legal limits".

This is thanks to Martignani's technology and the electrostatic charge that guarantees uniform coverage and absence of residue. In fact, the micro-drops are polarised and repel each other because they are charged with the same sign, while being attracted by vegetation of the opposite sign, they deposit with incredible homogeneity and without the slightest accumulation of active ingredient. This makes it possible to protect crops in a sustainable manner. 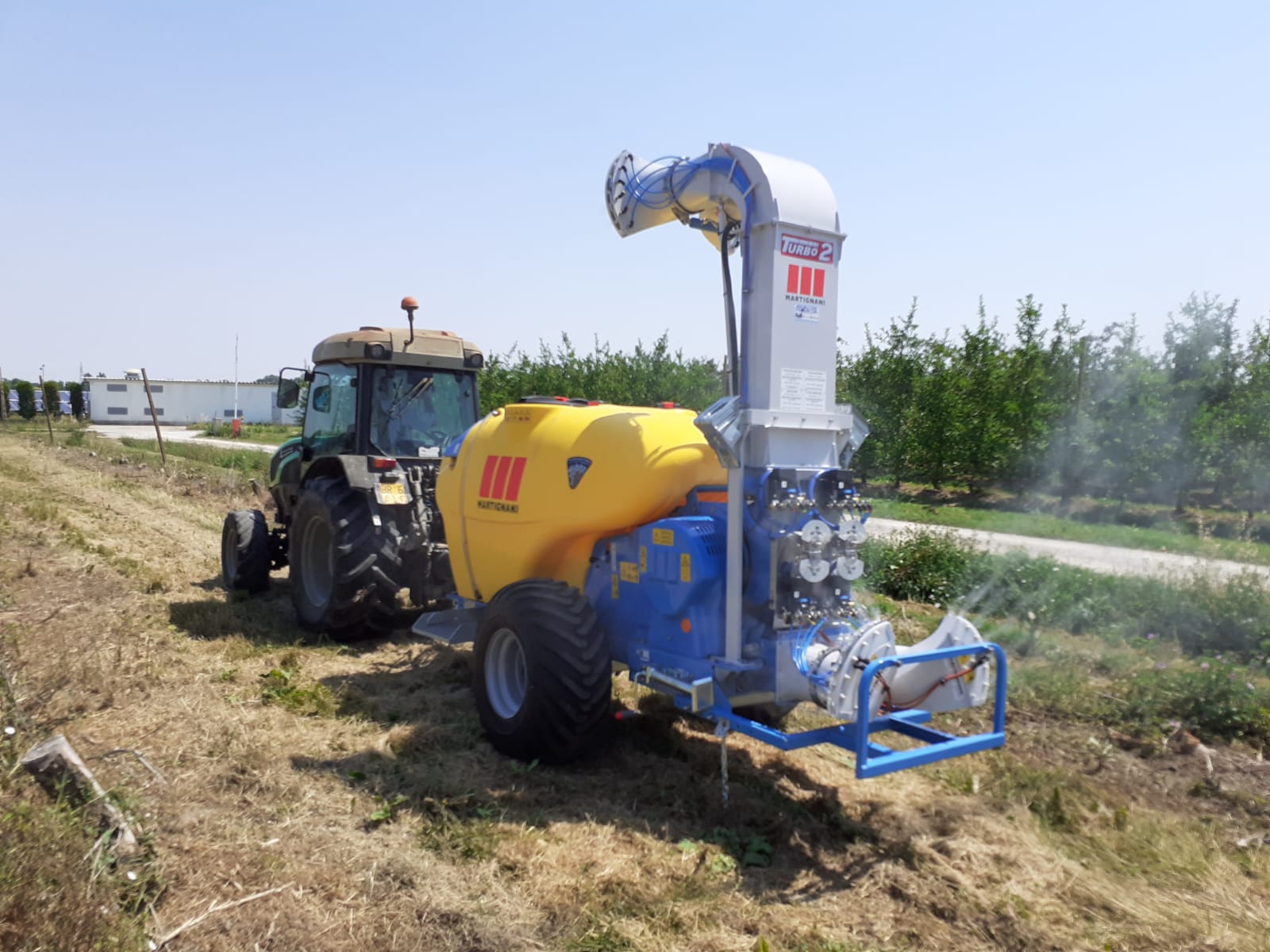 The company Sole e Terra carries out treatments at 300 litres/hectare and a speed of 6.8 km/hour and in just a few months has already noticed improvements in crops as well as considerable savings. Considering that most users of conventional sprayers for fruit make treatments with 1500 litres/hectare, we are talking about a water saving of around 80% and many fewer trips to fill the barrel. On this subject, he added that "Martignani sprayers never break down. We do treatments from February to October and there is practically no downtime. This is very important for us because at certain times, certain types of treatment have to be done quickly, and we cannot stop".

He goes on to say that "with Martignani we can treat up to 14 hectares in a day. Being able to minimise the number of fillings is fundamental, because at certain times of the season, the products we use are many and having to fill many times is an added difficulty as well as a waste of time".

After the testimonies of many of our customers around the world and thanks also to the Martignani Theorem created in the 1970s by our founder, Engineer Claudio Martignani, we know that after a few initial seasons (in which the manufacturer pays for the machine) the savings with the use of Martignani sprayers is at least 200 €/hectare per year on average. These figures are also confirmed by Fabrizio, "mainly due to time and fuel savings".