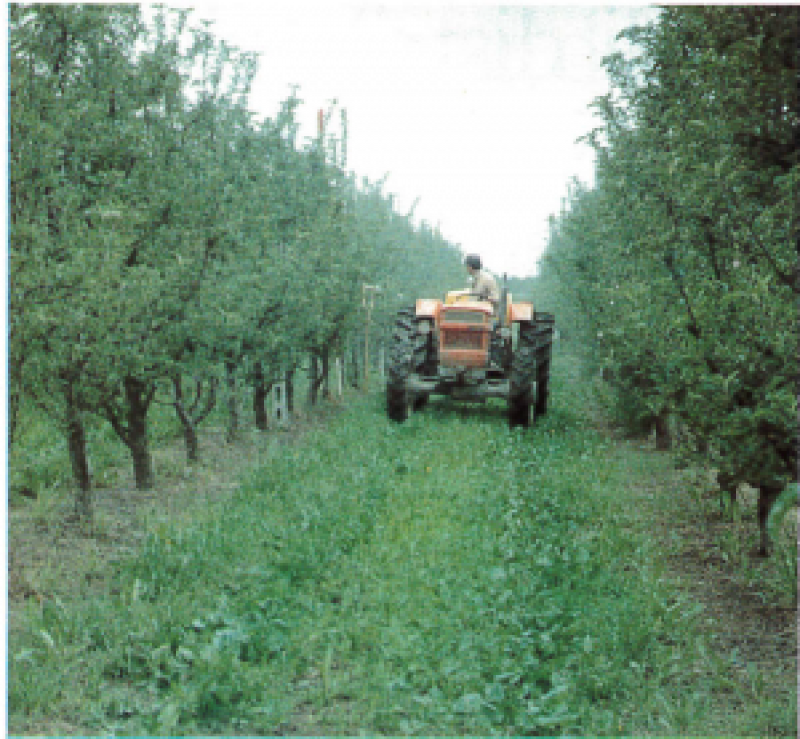 A study was conducted to evaluate the efficiency of different spraying techniques with different doses and volumes of pesticides against apple scab (Venturia inaequalis).
The investigation was carried out by examining the amount of a.i. on apple leaves corresponding to 1500, 1200, 900 and 120 l/ha, the last volume being applied with the electrostatic technique. This in fact proved to be more effective than either the pneumatic or high volume applications even when used with low doses of pesticide (20% and 40%).

With the introduction, in relatively recent times, of low volume treatments, there has been particular interest in the study of all those aspects (mechanical, agronomic, phytoiatric) related to the effectiveness of the pesticide (Cesari et al., 1986a; Baraldi and Cesari , 1986).

Among these, particularly those so-called “quantitative” such as “cover”, “deposit” and “residues” (Foschi et al., 1985), require more attention than in the past for the dual relationship that binds them on the one hand with the effectiveness of the intervention on plant protection and on the other hygienic – health issues (presence of residues on the leaves, the fruits, the environment).

It is because of these reasons that the interest of many researchers is focused on the study of the deposit left by the different treatments and the changes that it undergoes with regard to the doses of active ingredient, the volumes of water used and the nature of the plant.

Some authors observe, for example how the deposit is strongly influenced by the dose of pesticide (Vang-Petersen, 1982; Lougheed et al., 1983) therefore the distribution of lower volumes than normal and, consequently, higher concentrations of active ingredient, determines higher amounts of product on the plant. Variations in the deposit have also been related with the mineral oils added to the pesticide mixture (Thomas et al., 1986) with the volatility of the product (Ritcey et al., 1981) with the anatomical features of the plant (Ripley, 1979; Foschi et al., 1985; Flori et al., 1986).

As part of the fight against apple scab (Venturia inaequalis) an investigation was carried out to assess the effects that the distribution of a low volume pesticide mixture may have on the amount of deposit. The research tended to verify, in parallel with phytoiatric aspects (Bertini et al., 1987), the impact on the amount of product deposited on plants:

The test was performed in the province of Ravenna (NE Italy) on a 9 year old apple orchard (Table 1) divided into 12 parcels appropriately randomized made up of 120 plants each (6 rows of 20 plants). The doses and volumes in the test were those shown in Table 2.

Figure 1 – Gas chromatographic analysis of dithianon deposit present on the leaves of apple trees. Analytical conditions as described in the text; injection of 5 µl of toluene extract.

Table 3 – Deposit of Dithianon present on the leaves of apple trees.

In order to observe the leaf deposit caused by the treatment, after a single passage of the machine, average samples are taken of sprayed leaves and adjacent rows. This in order to obtain indications also on the quantity of the product “scattered” at each passage, but equally targeted on neighboring rows.

From each of the sampled leaves (No. 60 to row), collected on the central part of the plant at a height of 1.30 to 2.50 meters, in the laboratory 2 discs were taken with a diameter of 1.9 cm. 30 discs were then soaked for 5 minutes in 10 ml of toluene in order to extract the active ingredient of the pesticide sprayed (dithianon). 10 g of anhydrous Na2SO4 was filtered and a qualitative-quantitative determination of the pesticide was made by gas chromatography under the following conditions.

Under the conditions indicated the retention time of dithianon was 4:32 min. (Figure 1).

The analytical results obtained (Table 3) show how on the rows directly sprayed (1st row) the three high volumes (1500, 1200, 900 liters/hectare) produce deposits that are virtually similar in all cases, with values of 892 ./. 982 ng/cm2 of dithianon.

This effect, which appears unexpected when evaluated in light of the decreasing doses of active ingredient per hectare, is justified if considered in relation to the concentration of solution distributed, which for all the high volumes is constant and precisely of 37.5 g / hl (Table 2).

Table 2 . Doses of pesticide and water volumes tested the fight against apple scab

(1) A mixture of triforine + dithianon was used in the test (Bertini et al., 1987), while only the latter was considered when evaluating deposits.

(2) A 120 l/ha treatment was conducted with and without electrostatic system.

The same doses used in high volumes, if distributed by air and with 120 l/ha cause instead, on leaves sprayed directly, decreasing deposits of fungicide with values of 1869, 879 and 621 ng/cm2. It should be noted that in this case the concentrations of dithianon distributed at low volume are 12.5, 10 and 7.5 times higher compared to high volumes (Table 2).

Low volume application on the leaves with the electrostatic system varies in relation to the concentrations of the solution, with values between 1069 and 1672 ng / cm2.

Even in this type of distribution the pesticide present on the leaves varies in relation to the concentration of the solution, with values between 1069 and 1672 ng/cm2.

An interesting consideration of the dynamics with which the distribution systems in question operated (air convection and Mist Blowing with and without electrostatic system) also arises from the evaluation of the deposits present on the rows not directly sprayed (Table 3).

The quantity of product introduced by the pneumatic system is higher with 120 l/ha, while lastly, for the electrostatic system, there is a further and general increase in deposits.

From the point of view of deposits on treated plans, the study reveals that it is not so much the dose of active ingredient but its concentration (g/hl) in the solution sprayed. This is in agreement with statements of various authors (Frick, 1970); Jones et al., 1974; Vang-Petersen, 1982) and shows that, with equivalent volumes and mechanical means, the deposit varies in relation to the concentration.

The quantitative ratios shown between high and low volume, including pneumatic and electrostatic, and between standard and reduced doses are also confirmed by the findings of amount of product “scattered” on the rows adjacent to the one directly sprayed. In this case as well, the quantity of fungicide on the plant shows that the electrostatic prevails over the pneumatic system and the latter on the high volumes.

Ultimately surveys conducted have allowed a different and more detailed evaluation of the machines, the volumes and the doses used in the treatment of scab, allowing observations only partially deductible from the results of biological activity or from the physical and mechanical information on the functionality of the means.

In all cases, the deposits found were in agreement, limited to the central area of the plants, with the data of anti-scab activity (Bertini et al., 1987), confirming that the use of low volumes can allow an even substantial reduction of the doses of pesticide (20  40%), obviously in relation to the efficiency of the distribution system.